skip to main | skip to sidebar

Lucy Mythology: The meaning of you (Michael-AK2008) 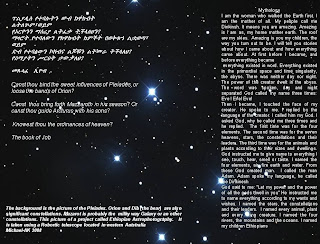 I am the woman who walked the Earth first. I am the mother of all. My people call me Dinkinsh. It means you are amazing. Amazing is I am as, my home mother earth. The roof are my skies. Amazing is you my children, the way you turn out to be. I will tell you stories about how I came about and how everything came about. At first before I became, and before everything became everything existed in word. Everything existed in the primordial space and time singularity, the abyss. There was neither day nor night. The power of the creator dwelt in the abyss. The word was spoken, day and night separated

God called my name three times: Eve ! Eve! Eve!
Then I became. I touched the face of my creator. He spoke to me. I replied by the language of the creator. I called him my God. I asked God, why he called me three times and he replied. The first time was for the four elements. The second time was for the seven heavens, stars, the constellations and their leaders. The third time was for the animals and plants according to their sizes and dwellings. God instructed me to give name to everything I see, touch, hear, smell or taste. I named the four elements, air, fire earth and water. From these God created man. I called the man Adam. Adam spoke my language, he called me Dinkinesh

God said to me: “Let my power and the power of all the gods dwell in you”
He instructed me to name everything according to my wants and wishes. I named the stars, the constellations and their leaders. I named every animal, plant and every living creature. I named the four rivers, the mountains and the oceans. I named my children Ethiopians

Abebe Kebede
Greensboro, North Carolina, United States
I am very interested in education and research issues as they relate to Africa